According to a Missouri State Highway Patrol report, a Chevy 500 driven by Samuel Hershberger, 23, of Versailles, was headed east on Route W when a 1995 Dodge 1500 driven by Miller eastbound on a private road pulled into the path of the Chevrolet.

Hershberger was wearing a seat belt, Miller was not. Miller was transported to Bothwell Regional Center by Cole Camp Ambulance District.

According to a Missouri State Highway Patrol report, Reed was traveling west on Route DD west of Southeast 241 Road in a 2003 Chevrolet TrailBlazer when he traveled off the right side of the roadway, struck an embankment, and overturned.

Reed was wearing a seat belt and was transported by private vehicle to Western Missouri Medical Center in Warrensburg.

An infant boy, a 4-year-old boy, a 6-year-old boy, and 29-year-old Shelby G. Slaughter, all of Warsaw, all received minor injuries at 12:20 p.m. Thursday in a Pettis County accident.

According to a Missouri State Highway Patrol report, the accident occurred as Slaughter was driving a 2012 white Chrysler Town & Country South on Highway 52 at Route E when she failed to stop at the stop sign and struck the passenger side of a 2016 Ford F-450 driven west by Theodore E. Palmer, 44, of Windsor.

Everyone involved was wearing a seat belt, and the injured were transported to Bothwell Regional Health Center by Pettis County Ambulance District. 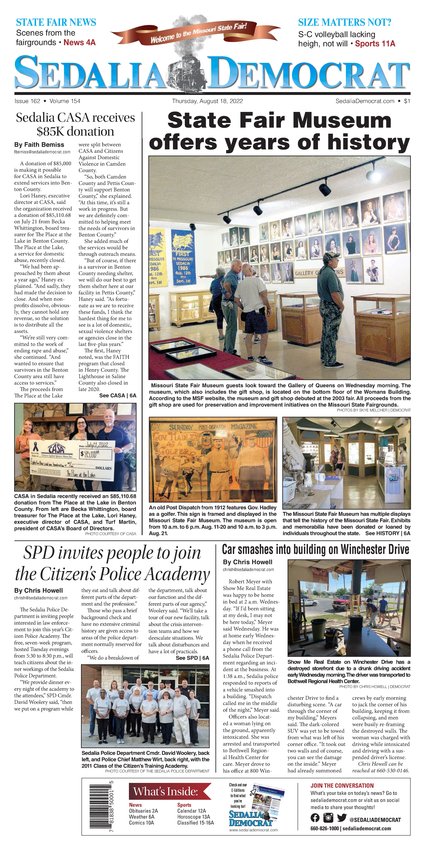