3:16 a.m.: Jorge Luis Marcos, 24, of the 400 block of Wilkerson Street, was arrested after a vehicle stop at South Moniteau Avenue and Wilkerson Street on a vehicle whose driver was known to have a suspended driver's license. He was transported to the Sedalia Police Department and issued a uniform traffic ticket for driving with a suspended license and released.

10:20 a.m.: Sarita Linda Leon, 60, of the 600 block of South Washington Avenue, was arrested after an officer was dispatched to a business in the 1400 block of South Limit Avenue for a report of theft. Leon admitted to being trespassed as well as stealing food. She was placed under arrest and transported to the Pettis County Jail, where she was booked and released for burglary and theft.

8:31 p.m.: Bryson M. Galarida, 19, of the 1200 block of East 18th Street, was arrested after officers attempted a traffic stop on a motorcycle with no license plates and no rear lights. The driver fled and refused to stop but was located 30 minutes later and arrested. He was transported to the Pettis County Jail for two failure to appear warrants and new charges of failure to yield, driving with a revoked license, and resisting arrest.

8:32 p.m. Edgar Cuc Cucul, 34, of the 400 block of East Jackson Street, was arrested after an officer was dispatched to South Beacon Avenue and West 16th Street to assist with a traffic stop on a vehicle that had been stopped for no headlights. The driver was intoxicated and had a revoked driver's status. He was transported to the Pettis County Jail, booked, and released with a for driving while intoxicated - alcohol - prior offender and driving with a suspended license.

3:18 a.m.: Mason J. Heston, 19, of the 200 block of East Second Street, was arrested after officers conducted a traffic stop in the 3800 block of East Broadway Boulevard on a vehicle failing to maintain a lane. Heston was transported to the Pettis County Jail and released pending state charges of driving without a valid driver's license.

5:22 a.m.: Walter W. Spooner, 63, of Warsaw, was arrested after police received a call regarding a possibly intoxicated subject driving a motor vehicle. The caller provided a vehicle description and officers located it and conducted a traffic stop at South Limit Avenue and Tiger Pride Boulevard. Spooner was arrested for driving while intoxicated and transported to the Pettis County Jail.

8:52 p.m.: James F. Johnson Jr., 38, of the 3500 block of South Grand Avenue, was arrested after being observed in a vehicle on West 16th Street with no headlights. Johnson was intoxicated and had a revoked driver's license. He was found possessing methamphetamine and a digital scale. He was transported to the Pettis County Jail, where he was placed on a 24-hour hold pending charges of drug possession, driving while intoxicated by alcohol - persistent offender, driving with a suspended license, and possession of drug paraphernalia.

7:05 p.m.: Officers responded to the 900 block of Olsen Drive for a structure fire. They conducted security and assisted firefighters. The fire was ruled accidental.

6:43 p.m.: An officer was dispatched to the 1500 block of South Osage Avenue for the report of a structure fire. A house was engulfed in flames, but Sedalia Fire arrived a short time later and was able to get the fire under control. No foul play is suspected.

10:31 a.m.: Officers took a report of theft in the lobby of the police department. The treasurer of an organization in the 600 block of West of Broadway Boulevard noticed approximately $7,000 had been charged to their bank account without permission.

6:00 p.m.: A victim in the 1400 block of South Limit Avenue reported her wallet and contents were lost or stolen. She later reported that someone had attempted to use cards from her wallet to Cash App money to themselves.

8:05 p.m.: Officers were dispatched to the 2500 block of West Broadway Boulevard for a theft report. They gathered necessary information to generate a report.

1:30 p.m.: Deputies took a report of burglary in the 22000 block of Smasal Road in Pettis County. The investigation continues.

11:30 a.m.: Denning Fields, 60, of Warrensburg, was arrested in Johnson County for felony promoting child pornography. He was processed and released roadside. 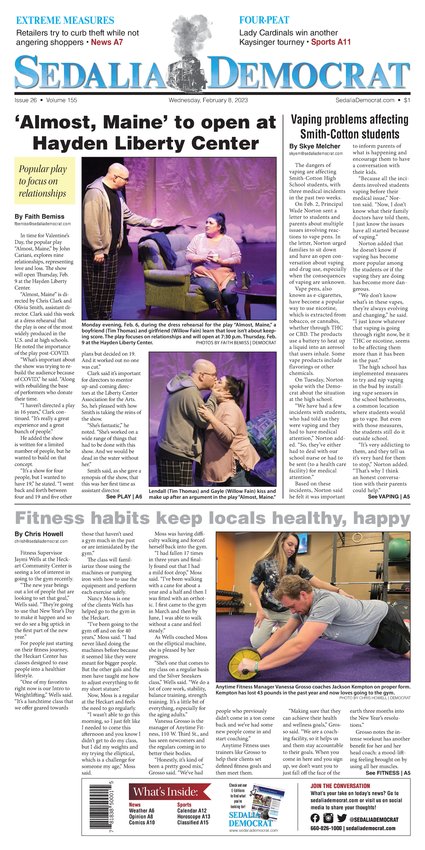