Fundraiser to be hosted for child with cancer

Green Ridge kindergarten teacher Jill Piscopo cries tears of joy at a surprise visit Tuesday by her student Chevi Meyers, 5, who has stage four cancer. Chevi hasn’t been able to attend school due to her illness and its treatment. A fundraiser is planned for Chevi on April 23. Photo by Faith Bemiss | Democrat

Posing for a photo in the Green Ridge School library on Tuesday are Chevi Meyer, 5, and from left her mother Destiny Strickland, STEAM teacher and librarian Nancey Dove, kindergarten teacher Jill Piscopo, and grandmother Julie Meyer. Chevi is known for her smile and freckles, and her love of unicorns and gold stars. Photo by Faith Bemiss | Democrat

Due to taking chemotherapy treatments, Chevi Meyer recently had her hair cut. Chevi will soon begin a four-week round of radiation at Children’s Mercy Hospital in Kansas City. Photos courtesy of Nancey Dove
Previous Next
Posted Friday, April 8, 2022 12:51 pm
By Faith Bemiss, fbemiss@sedaliademocrat.com

GREEN RIDGE — In a perfect world, rainbows, unicorns, teddy bears and stars are magic to a 5-year-old. In a perfect world, there is no sickness or cancer, but through the support and love of a whole community, the magic is still there for Chevi Meyer, 5, who has stage four cancer.

Chevi, a kindergartner at Green Ridge R-VIII School, is the daughter of Bubba Meyer and Destiny Strickland. The family said Chevi is battling stage four Rhabdomyosarcoma, a rare type of cancer that forms in the soft tissue. Chevi’s cancer, a lump in her right cheek, was noticed by her P.E. teacher Jason Cannon, and the school alerted her mother. She was sent to Children’s Mercy Hospital in Kansas City where she received the diagnosis. Cancer has already spread to her lungs and lymph nodes.

The community and school of Green Ridge are coming together for a fundraising dinner that will help offset medical expenses for the family. Overseeing the fundraiser is Green Ridge School STEAM teacher and librarian Nancey Dove. Dove said she and Chevi’s grandmother Julie Meyer were neighbors growing up in Sedalia. A cancer survivor herself, she wanted to help the family.

“In 2014, they (Green Ridge) did a fundraiser for me because I had breast cancer,” she noted. “So, I promised God, ‘if you help me stick around, I’ll pay it forward.’”

The event, on Saturday, April 23, will include a dinner and a silent and live auction. Dove noted they are still accepting auction items and currently have items such as a Yeti cooler, toolboxes by Stanley Black and Decker, lap quilts and wood art pieces.

Dove said on Tuesday, before a surprise visit by Chevi, that the little girl is known for her bright smile and a sprinkling of freckles across her nose.

“Chevi, before she got sick, would come to the library and they would get stickers,” Dove said. “Because I’m teaching them to be responsible with books.

“And every week she’d come up to me and say, ‘Mrs. Dove, I want a golden star,’” she continued. “So, my friend Marjorie made her a golden bear.”

She added Chevi has a lot of spunk and loves books. Her kindergarten teacher Jill Piscopo noted she especially loves books about unicorns and she excels at math.

“She loves to be read to,” Piscopo said. “She has the sweetest smile that you could ever … Now I’m going to cry.

“The sweetest smile that you could ever see and her little freckles,” she continued. “She was a good friend to everybody, and everybody loves her.”

A surprise visit to the school by Chevi and her mother on Tuesday brought both Dove and Piscopo to tears. Chevi arrived in her rainbow and unicorn cap and unicorn shoes to hugs, tears and smiles.

Chevi’s mom said since Chevi had to have her hair cut due to chemotherapy, Chevi was going to shave her mom’s hair off Tuesday night. She added Chevi has been getting chemo every Friday and will soon begin a four-week round of radiation treatments. Due to chemo, Chevi’s ovary was removed and cryogenically frozen in hopes that she can have children when and if she reaches adulthood.

“It is stage four and group four, and the fastest spreading cancer that there is in children,” her mother explained. “We go for a full dose of chemo this Friday where we’ll have a hospital stay again.”

Strickland added if anyone has hats or knit caps they would like to donate, the family would appreciate it since Chevi’s head gets cold due to the chemo treatments.

Dove said the fundraising dinner will be from 5 to 7 p.m. Saturday, April 23 in the Green Ridge School cafeteria. On the menu is pulled pork, a Greta roll made by Greta Turner, cheesy potatoes and green beans. The cost is $10 for adults and $5 for children 5 and under. The live auction begins at 7 p.m. To donate to the auction, email Dove at doven@grtigers.net or call Julie Meyer at 660-221-5775. 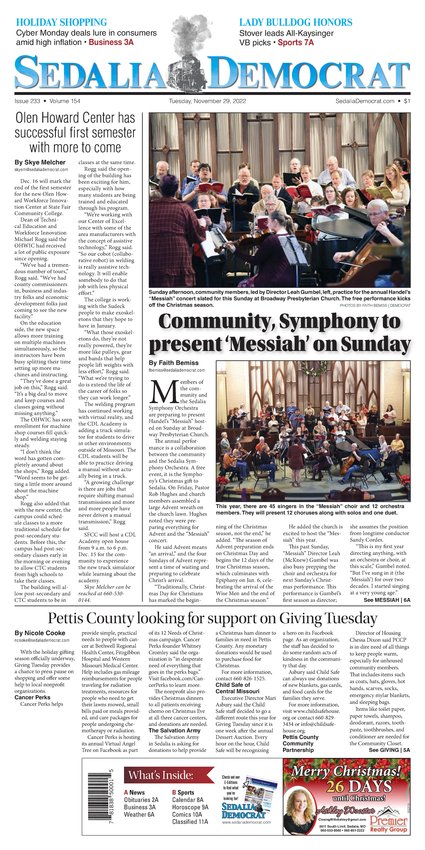