Haircuts for an inspiring cause

Annette Smith, left, and Dr. Misty Todd show off their long locks before having their hair cut at The Parlour hair salon in Sedalia. Smith and Todd work at Bothwell Regional Health Center and teamed up to donate their cut hair to Wigs for Kids, a nonprofit organization that provides wigs to children free of charge.

Dr. Misty Todd is shown with The Parlour stylist Danielle Kendrick while getting her hair cut. Smith’s stylist was Erica Gardner, owner of The Parlour.

Smith and Todd sporting their new shorter hairstyles after donating their hair.
Posted Friday, May 20, 2022 1:03 pm

Getting a haircut is a mundane occurrence for most people — just another task on the to-do list. However, getting a haircut can be a powerful means of helping someone in need.

Annette Smith, executive assistant to the Chief Nursing Officer at Bothwell Regional Health Center, and Dr. Misty Todd, family and women’s health physician at Bothwell Cole Camp Clinic, both know how important a haircut can be. Between them, they have donated their hair to charity a combined 10 times.

Recently, Smith and Todd made a plan to donate together, both choosing the charity Wigs for Kids, a nonprofit organization that provides wigs to children free of charge.

“There are so many financial burdens associated with an illness of a child who loses their hair,” Todd said. “Spending money on a wig shouldn’t be one of them.”

According to its website, Wigs for Kids was founded in 1979 and currently provides wigs for children who have lost their hair due to a medical condition or treatment. Wigs made by Wigs for Kids are created entirely from donated hair and are designed to look like a child’s natural hair. It takes approximately 150,000 strands of hair to create each wig, so donating enough hair for a wig requires more than a simple trim.

The required hair length depends on where it is being donated, but Wigs for Kids has a minimum donation length of 12 or more inches, with at least 14 inches preferred. Donated hair should not be color-treated or permed. Smith and Todd both said it takes them multiple years to grow their hair to the desired length.

The women said they are “blessed with thick hair,” so donating their hair is a great way to share their bounty with others.

For Smith, hair donation is a family affair. She said she thinks of her Aunt Barbara, who is a cancer survivor, when she donates her hair.

“My daughter Morgan donated hair at the age of 7 to Locks of Love in honor of our Aunt Barbara,” she said. “Morgan inspired me to follow suit with my first donation two years later.”

Todd was first inspired to donate her hair when she was young, when older girls she looked up to donated their hair. She continues to donate regularly because it is a meaningful act that can have an incredible impact on the lives of others.

“It’s rewarding to know that the people who may be wearing a wig with my hair likely have more life stressors than I can imagine, and I’ve helped alleviate one of them,” she said.

While this was Smith’s final time donating her hair, she encourages others to do the same, citing it as a rewarding experience that can make a positive difference in someone’s life. She said going through the process with another person made it that much more enjoyable, and Todd agreed.

“Donating is much more fun as a duo,” Todd said. “I highly recommend having someone else to talk through the process with before, during and after — including quick office check-ins to make sure the new ‘do looks okay!” 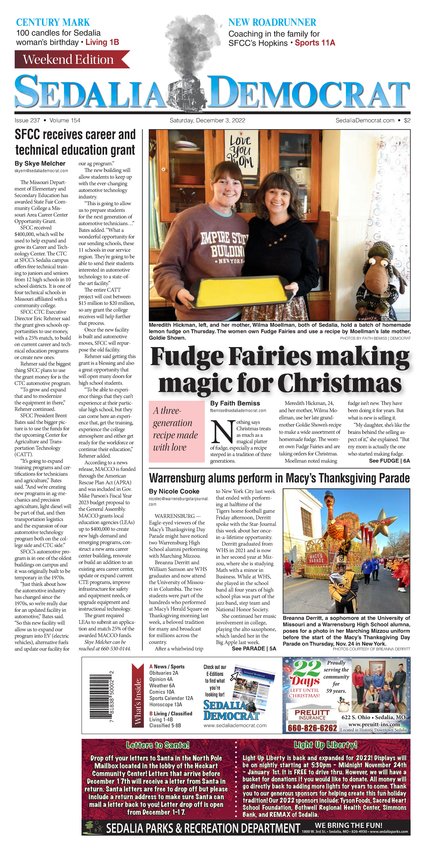